An alternative message flow for a Paxos cluster that

The usual flow of messages in a Paxos protocol is as follows: 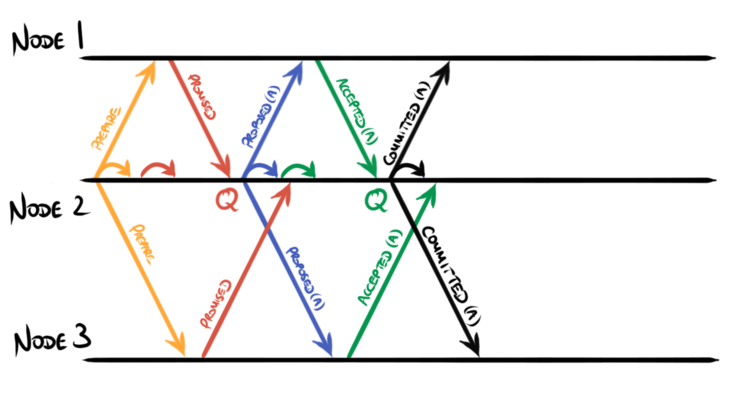 Firstly one of the nodes (node 2 in the diagram) broadcasts a prepare (a.k.a. phase 1a) message and the other nodes respond with promised (a.k.a. phase 1b) messages. When a quorum of these has been received, indicated by a Q on the diagram, the algorithm is said to have completed phase 1 and enters phase 2. In phase 2 a proposed (a.k.a. phase 2a) message is broadcast and a set of accepted (a.k.a. phase 2b) messages sent in response. On receipt of a quorum of acceptances by node 2 the proposed value is chosen and acknowledgements of this fact can be sent. The other nodes are informed that this value is chosen by sending a committed message.

The system then remains in phase 2, sending further proposals and acceptances, for an extended period, typically many hours or days until a failure or transmission delay occurs, at which point it returns to phase 1 again: 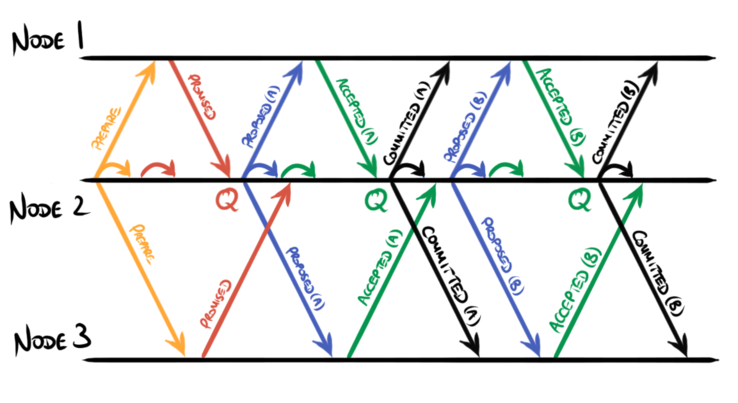 At higher load, writes may be overlapped which allows committed messages to be combined with subsequent proposed messages: 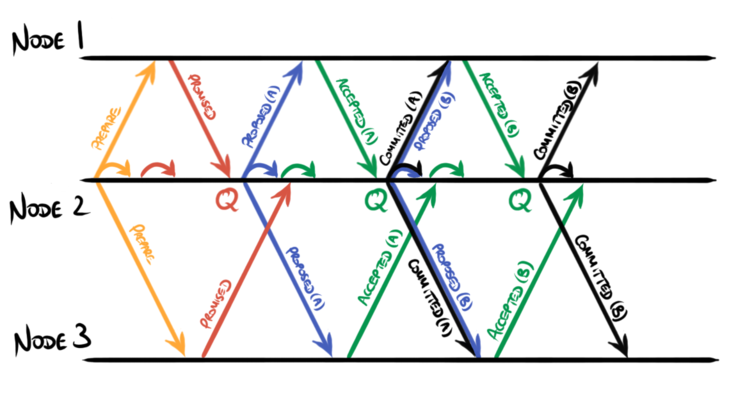 If the writes are more heavily overlapped, it might be that the leader proposes quite a few values A, B, C, … W, X before achieving quorum on having written A, so committed(A) ends up getting combined with proposed(Y).

An alternative scheme is for each acceptor (including the leader) to broadcast accepted messages to all other nodes on receipt of a proposed message, and to have each node check for a quorum itself rather than to wait for a committed message from the leader. 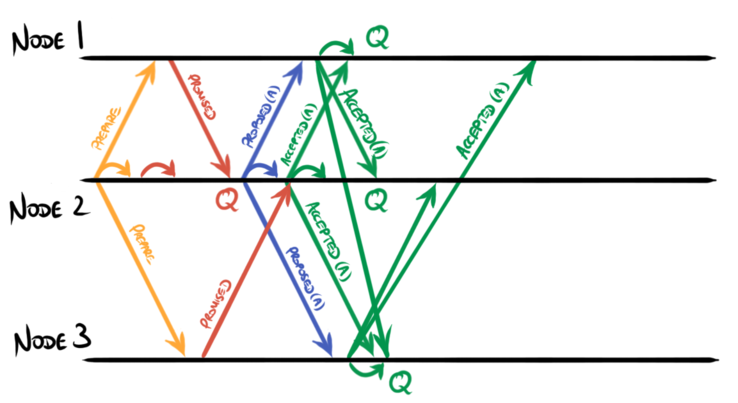 Notice that each node independently achieves quorum (shown as ‘Q’) on the chosen value on receipt of accepted messages from a majority of its peers. Since this is a three-node cluster, it only needs a single accepted message, together with the one it sends itself, to reach quorum. This means there is no need for the non-proposing nodes to broadcast their accepted messages: 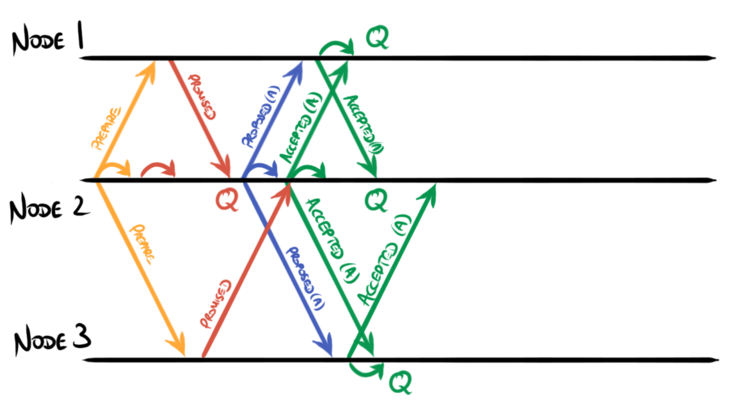 In this scheme the proposed and accepted messages from the leader can always be combined into a single message, since there is little point in the leader broadcasting a proposal that it does not itself accept: 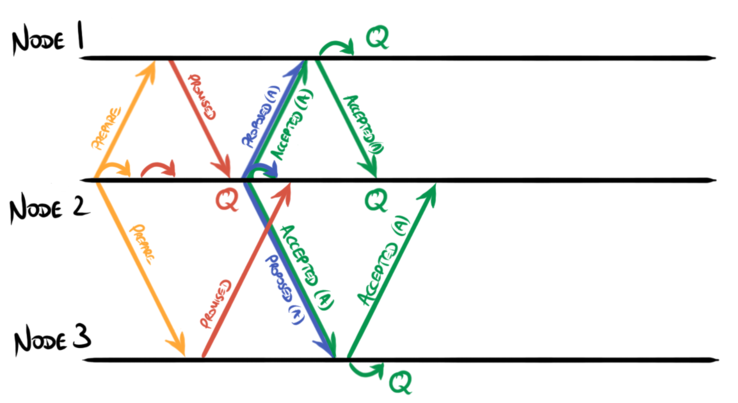 Subsequent proposals follow the same pattern and therefore do not need to re-enter phase 1. The overall flow of messages is reduced simply to the leader broadcasting proposed+accepted messages and its followers responding with accepted messages: 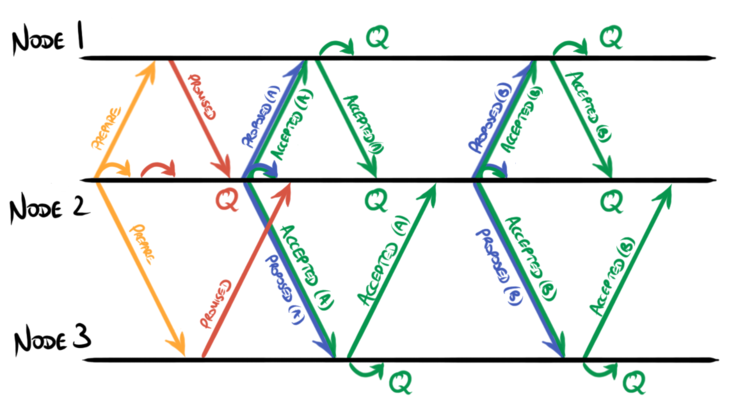 These messages can be overlapped, allowing proposals to be made without waiting for earlier ones to be accepted: 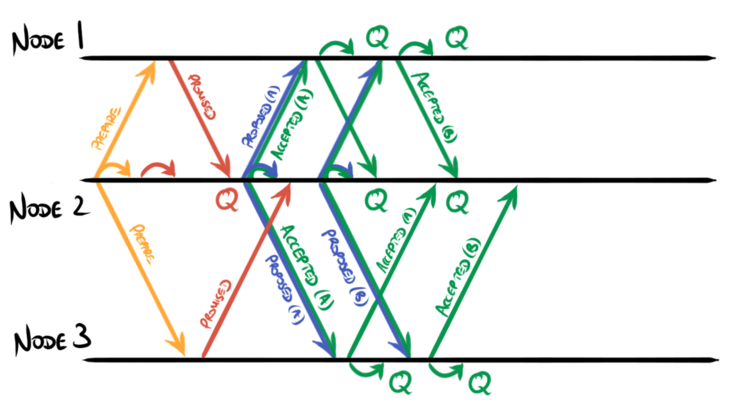 The overall effect is that the leader sends a stream of values (plus a small amount of metadata) to its followers, and the followers respond with a stream of acknowledgements.

It’s particularly nice for three-node clusters where accepted messages from the follower nodes don’t need to be broadcast, and the followers learn that values have been committed after a single message delay. For three-node clusters this reduces the number of messages required compared with the standard scheme, but in larger clusters, or during reconfiguration, this advantage is lost.

Note also that both proposed and committed messages generally carry the value of the proposal in question, whereas accepted messages do not. If values are large and the cluster is small then broadcasting accepted messages could be significantly cheaper than sending each value twice over the wire.

One disadvantage is that if nodes must be able to recover following a crash (e.g. a power outage) then this scheme requires two durable writes in sequence: once before the leader sends its proposed+accepted message and a second before each follower responds with an accepted message. In contrast, if the leader’s proposed and accepted messages are not combined then it can send the proposed message, then perform a durable write, and finally send its accepted message. This issue is also present in Viewstamped Replication (VR) and the discussion about it in VR is pertinent here too.