Following on from the previous post on rate limiting, recall the graph of the level L of water in the bucket as a function of time: 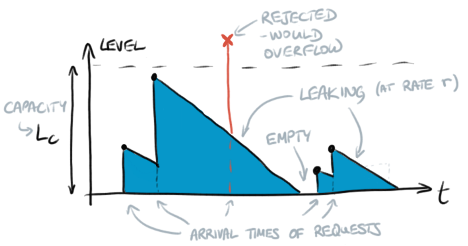 The bucket capacity represents the system’s ability for handling bursts of traffic. It should not be set so high that a burst of requests could overwhelm the system before the bucket fills up.

As drawn, the bucket capacity LC and the leak rate r are constant, but for more advanced rate-limiting situations one may want them to vary. Their ratio, LC/r is the reset time: the time it takes for a full bucket to completely empty by leaking.

Sometimes the first few requests to a service are more expensive or are handled more slowly, e.g. due to cold caches. In this case it may be useful to start with a tight rate limit and then slacken it over time. A simple approach is to progressively increase r (and probably to increase LC too to keep the reset time constant).

A more adaptive approach would be to make r and/or the size of each request a function of the current level L in the bucket. Given a reasonably steady rate of requests, the bucket is normally either mostly-empty (if the rate is lower than the limit) or mostly-full (if the rate is higher than the limit). If the request rate is significantly lower than the limit then any caches in the system may “cool down” and it may be desirable to reduce the leak rate and capacity to protect against a sudden burst of traffic.

A single-bucket rate limiter could be a bottleneck in a distributed system, but the analogy (and algorithm) can be extended across multiple buckets. If the buckets are all independent then they impose independent rate limits, obviously, which may be appropriate. Alternatively the buckets could be linked together by occasionally moving some water from one bucket to another, freeing up some extra capacity in one otherwise-overfull bucket.

This may not need any terribly strong consistency, depending on the target SLA: it is probably fine to occasionally lose a bit of water in transit, which has the effect of allowing more requests through than are technically permitted.